Language symposium stresses need to listen as well as talk… 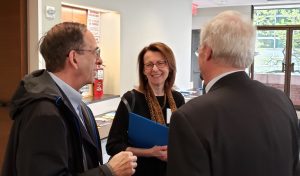 In a world in which both problems and solutions are becoming global in nature, we must learn to listen to the world in all its diversity – in the languages of ordinary people. That was one of the main conclusions of the Annual Symposium of the Study Group on Languages and the United Nations, which met in New York on May 9 and 10, 2019.

“Listening, Talking and Taking Action in a Multilingual World” was the theme of the symposium, which brought together more than a hundred UN staff and diplomats, representatives of nongovernmental organizations, academics and language experts for two full days of lectures, papers, and discussion.

The linguistic dimension of the UN’s work, said symposium participants, is often neglected or simply taken for granted – both the formal use of the six UN working languages (Arabic, Chinese, English, French, Russian and Spanish) within the UN, and also the UN’s interface with a public that speaks literally thousands of different languages.

Two-way conversation is both a linguistic challenge and a necessity, since the UN needs buy-in from all parties, including the larger public that it serves both directly and through its member-states.

Symposium participants noted that UN Secretary-General António Guterres, is working to change the lack of attention to language. “Multilingualism is a core value of the United Nations,” Secretary-General Guterres has declared – particularly in an environment in which the UN’s 17 Sustainable Development Goals cannot be achieved without active cooperation and input at every level of society.

Three keynote speeches emphasized contrasting aspects of this issue. Thomas Ricento, professor of education at the University of Calgary and a specialist in applied linguistics, stressed misunderstandings about the nature of language – misunderstandings that can lead to poorly designed language policies. Ambassador Narjess Saidane, of the International Organization of La Francophonie, suggested that linguistic inequality undermines the UN’s message and creates a sense of inferiority among those who are forced to adapt to their more linguistically powerful neighbours.

Director of internationalization at Facebook, Iris Orriss, by contrast, pointed to the fact that Facebook is widening the languages it uses to embrace more and more linguistic diversity. This openness to diversity might serve as a model for the UN, as various participants observed.

Among the contributors to the programme in New York were ambassadors and representatives from Mali, Canada, Portugal, Spain, and the League of Arab States, as well as staff from numbers of UN offices and divisions.

Support was provided by the Center for Applied Linguistics (Washington DC), the Esperantic Studies Foundation, La Francophonie, the Universal Esperanto Association, and others. Birkbeck, University of London provided support for a parallel workshop at the United Nations.

The Study Group on Language and the United Nations seeks to create dialogue on UN language policy and on the UN’s use of language and languages in dealing with its many constituencies.

Next year’s symposium will take place on May 7, 8 and 9, in New York City and in Princeton, New Jersey. Titled “Language and Migration: Experience and Memory,” it will be sponsored in part by Princeton University.