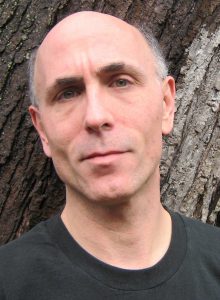 Profile: David Gaines (1961) is an American composer of contemporary classical music.  Gaines is particularly known around the world as a champion of the international language Esperanto. The "Society and Esperanto" Foundation of Bulgaria named him an Honorary Life Member in 1994, and in 2006 the international organization Muzika Esperanto-Ligo awarded him the title of Honorary President. Esperanto magazine, published in The Netherlands, commissioned him to write their obituary for the distinguished composer Lou Harrison after his death in 2003 (Harrison was renowned for his support and use of Esperanto in his own music). His output includes two symphonies, concertos for euphonium, trombone, and baritone saxophone, numerous pieces of chamber music for a wide variety of instruments, plus electronic music. His principal compositions are available on compact discs and as digital downloads from Navona Records, MMC Recordings and Verda Stelo Music and are published by Verda Stelo Music. Radio stations across the USA, as well as Radio Free Europe/Radio Liberty and internet music streaming sites, have broadcast these recordings. A graduate of Northwestern University, American University, and Johns Hopkins University's Peabody Conservatory of Music (where he earned a doctoral degree in composition), Gaines studied with M. William Karlins, Stephen Syverud, Jerzy Sapieyevski, Jean Eichelberger Ivey, and Robert Sirota. Gaines's numerous awards include annual ASCAP Standard Awards since 2000; First Prize in the 1997 College Music Society Mid-Atlantic Chapter Student Composers Competition; and a First Prize in the World Esperanto Association's 1995 International Fine Arts Competition. He has been an instructor for The New School's online Master of Media Technology degree program, for which he created the first Internet college-level music course for credit (on the history of electronic music technology), as well as an adjunct associate professor at University of Maryland University College.