About us Staff and Partners Yevgeniya Amis 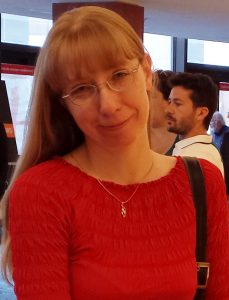 Profile: Yevgeniya (Ĵenja) was born en Kiev (Ukraine). In 2005 through September 2010 she has lived in Atlanta, Georgia; she currently lives in Montreal, Canada. She graduated as a journalist and editor (of Russian and Ukrainian) from the National Technical University of Ukraine, and from University of Quebec at Montreal, faculty of Business Administration, with a Master's degree in Marketing.

In Ukraine, she worked as a journalist with a number of newspapers and magazines writing mostly about tourism. From 2002 to summer 2007, she was the editor of Kontakto – soci-cultural magazine of UEA/TEJO; she was a co-editor of TEJO Tutmonde (2004-2006) and Esperanto USA (2005-2007). In 2006-2010, she has worked with the American Red Cross as a Database and Direct Mail Supervisor and Market Analyst, and she currently works for the National Film Board of Canada.