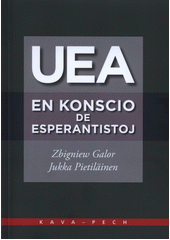 UEA en konscio de esperantistoj is a detailed sociological study of the Esperanto movement, one which builds upon and complements the sociological works by Peter Forster, Frank Stocker and Nicolas Rašić. The idea for this study was born during the 93rd World Esperanto Congress in Rotterdam, and surveys were begun during the World Esperanto Congress in Bialystok, Poland, the following year. The first part of the book presents the results of that quantitative study: it sketches a portrait of the respondents (all Esperantists) – their relationship with Esperanto culture, motivations for their interest in Esperanto, their opinions about the World Esperanto Association (UEA) and the World Congresses, their UEA membership (lapsed, renewed, type of membership), etc. The authors present a portrait of UEA from the perspective of SWOT analysis (analysis of strengths, weaknesses, opportunities and threats), and they comment upon the contradiction between the internal and external goals of the organization. The second part of the book looks at UEA’s image in a wider socio-ideological context: for example, they look into the relationships between Esperanto and socialism and capitalism, communication problems and ideology, and, lastly, linguistic imperialism. An impressive list of selected publications on the sociology of Esperanto completes the work.

Both books are available through the UEA book service