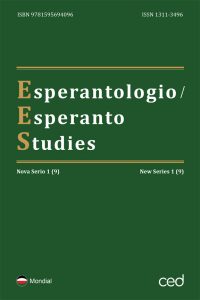 is an international journal on all phenomena relating to Esperanto. It publishes articles based on original studies of the linguistic, historical, literary, psychological, sociological, and political aspects of Esperanto, as well as reviews.

Esperantologio was founded in 1949 by Paul Neergaard (Denmark), with an 11-member editorial committee, among them Björn Colllinder, W.E. Collinson, Kálmán Kalocsay, Stefano La Colla, Gaston Waringhien and Eugen Wüster. It appeared irregularly until 1961. In 1999 it was revived as Esperantologio / Esperanto Studies by Christer Kiselman (Sweden), under whose editorship eight issues appeared between then and 2018. In 2019, its publisher became the Centre for Research and Documentation on World Language Problems (CED). Issue number 9 (1) was edited by Humphrey Tonkin and Orlando Raola.

Of the eight issues, edited by Prof. Kiselman, numbers 3-8 are available online at http://www.cb.uu.se/esperanto/. For paper versions please contact www.kava-pech.cz.

PDF Downloads of Contents 1 (9) (in Esperanto)